This blog post is all about one single tip for the aspiring street photographer. It’s this: don’t set yourself specific tasks or place yourself in the straitjacket of a “concept.” Just take pictures and allow themes to emerge.

You may not recognise them at first. You’ll see various subjects in the street — shoppers, workers, entertainers, people making deliveries, others standing around in groups — and occasionally you’ll make your selection and take a picture. You’ll probably think your choice is governed almost entirely by other factors, such as expression, gesture, dress, lighting and background. But it’s not.

There’s always an original motivation which propels you towards one subject rather than another. Clearly, this motivation lies within the photographer and doesn’t form part of the outside world.

For example, if you frequently take photos of people in groups, does each particular group have some unique quality that deserves your attention? Of course not! You’re attracted by many different groups, for reasons of your own.

Maybe you have a deep tribal instinct, one that’s normally hidden but which emerges when you look at the world through your camera. Or maybe groups disturb you and you want to come to terms with them.

Whatever it is, you choose to take pictures of people in groups — perhaps without being fully aware of it. The photos get mixed in with all the others you take: of people by themselves, small details, crowds, dogs…

The Emerging Theme
After working at street photography for a year or two you’ll see themes emerging naturally. Going back through your pictures you’ll notice the subjects which have held your interest. Perhaps you’ll even be able to assemble a few collections: galleries in which there’s some commonality between shots.

The process I’ve described is one I’ve noticed in my own street photography. First and foremost I’m attracted by contrasts. I like to see one idea (or shape, or colour, or an entire culture) pitted against another. Yet I’d been taking street pictures for a year or two before I realised how endemic the process had become. Now, I don’t think I could stop myself seeing peculiar contrasts even if I tried.

For example, take my featured image (above). Taken outside a Chinese temple in Thailand, it’s a nice jumble of colours, with an emphasis on the lady in pink who wears an inappropriate tee-shirt proclaiming “Playgirl Requested.” You can see immediately the clash of cultures and languages, but the contrast also extends to the two tourists at the temple entrance. They’re dressed in primary colours unlike the other women — and they face in the opposite direction.

You could argue that contrasts do not in themselves constitute a theme. Their inclusion in street photography is like adding seasoning to a meal. Perhaps you’d be right, but it’s not only contrast that attracts me to certain subjects rather than others. I also like pairs.

The Joy of Pairs
You’ve probably noticed there are two pairs of people in the featured photo. Communication passes between the members of each pair. That’s the joy of being in a group of two: you can be mutally supportive, whether you’re sightseeing or working seriously.

Here (above) are two cyclists who share the same uniform — passing under a bougainvillea bush (fuengfa in Thai) of much the same colour. It’s good when the pair of subjects share something in common with their surroundings.

Fortunately for me the world is full of pairs: lovers, brothers, sisters, married couples or just-good-friends. I spotted the scene below from the top of a bridge and hurried downstairs to take it.

The two young women with a similar taste in clothes and accessories were still in animated conversation, so I wasn’t disappointed. Moreover, I found a striking contrast with the (married?) couple on the right and the man sitting by himself on the left.

In a sense, the two pairs of people and the man in black form three distinct subjects in the above image. Their respective states of mind are entirely different: reflective (man in black), upbeat (cartoon couple), and somewhat concerned (married couple). Meanwhile, life goes on all around them.

Here’s one last pair: two girls in Singapore taking a selfie. What motivated me to take the shot? Their matching flip-flops, of course! 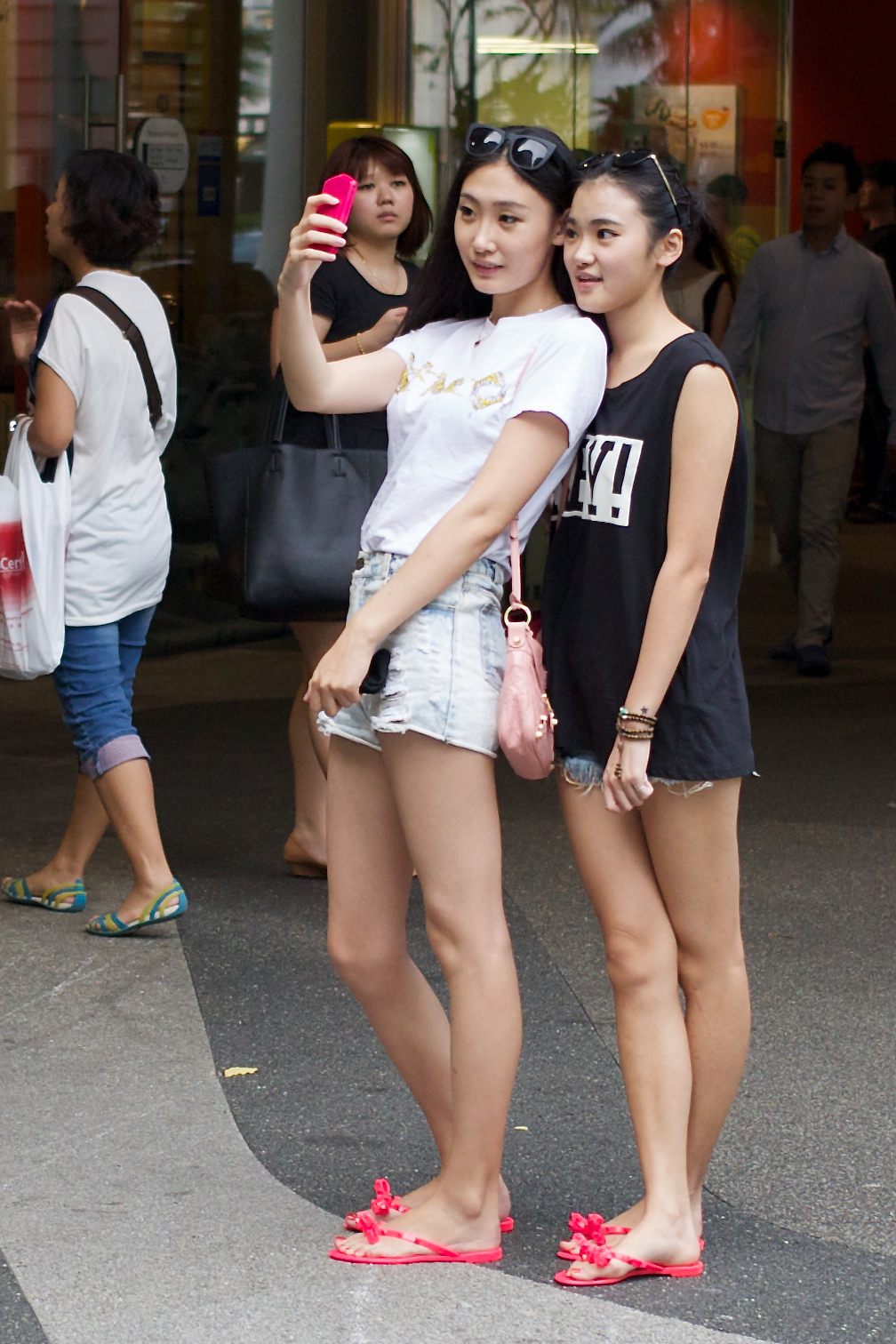 Other Themes
I think I have around a dozen other themes which have emerged naturally during the course of taking street photos. I’ll be talking about them in future blog posts and I’ve already mentioned one or two — such as “The Face in the Crowd” — in articles I’ve posted recently.

Off the top of my head, without thinking too deeply about it, here are some of the subjects to which I’m drawn:

People eating; shoppers going in an out of a mall; people playing with water; men working; women standing around “looking good”; people looking bored and anxious; anyone carrying something unusual; people who are extremely ordinary yet somehow beautiful.

I remain open to other ideas, but these will keep me going for a while.

​To stay updated with my latest published articles, exhibitions and projects, feel free to join my e-mail newsletter.

It's spam-free and I'll only e-mail you when I think you'll find something ​ interesting, intriguing or useful!

Free email newsletter ​for serious street photography enthusiasts.
​In-depth analysis, op​inion and tips. ​
No spam - I will only send you quality ​articles that I think you will find interesting.

This site uses Akismet to reduce spam. Learn how your comment data is processed.

Scroll back to top